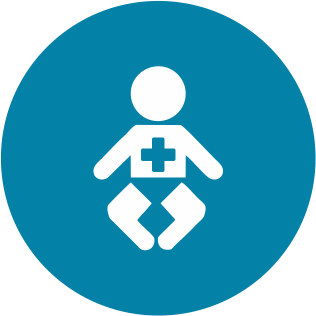 Neonatal surgeons at Narayana Health are experienced professionals dedicated to perform corrective surgeries on newborns. They are supported in their task by state-of-the-art equipment, modern facilities, and well trained medical staff.

The presence of a multi-specialist team at Narayana Health means that new-borns have the best care possible during the procedure and the following recovery period. The neonatal surgeons at Narayana Health treats various complex medical conditions in infants including

Foetal tumours are masses that can form from several foetal tissues. As these tumours need a significant supply of blood, they can be quite harmful to the foetus leading to heart failure and hydrops. Hydrops is a condition in which fluid accumulates in the chest, abdomen, and other tissues of the body. Most foetal tumours, however, are not malignant. Once they are removed from the body, they won’t recur.

The course of treatment for foetal tumours depends on the location, underlying presence of associated genetic conditions, and many other factors. In most cases, blocking the blood supply is the way to treat a foetal tumour, but if it is severe, neonatal surgery is essential.

Sometimes, the tumour may be present in a position that compresses the airways. For such conditions, the EXIT technique is used. EXIT or ‘ex utero intrapartum treatment’ is a special method in which an incision is made in the uterus and the baby is delivered through it. Such surgery could even be performed on the baby while in utero by experts to allow the baby to grow well for later definitive surgery once the baby is born.

More than 600 neurological disorders can affect individuals throughout their lifetime, and some of them can occur in newborns as well. These disorders may either exist at birth or occur shortly after birth.

Your baby’s brain development starts in the first month after conception and will continue to develop throughout pregnancy and after birth. Any disruption or injury to the brain or spinal cord during this critical period can lead to neurological problems affecting the brain, peripheral nerves, and muscles. Some of the common neonatal neurological disorders that a baby may have are seizures, encephalopathy, intracranial haemorrhage, birth asphyxia from oxygen deprivation, hypotonia, metabolic disorders of the brain, etc.

During birth, neurological disorders can be caused due to several factors, such as lack of oxygen, infections passed to the baby from the mother, physical injury leading to internal bleeding in the brain. Some of the disorders can develop during the period after birth as well due to head injury, infections like meningitis or encephalitis, immune disorders, or other medical conditions. Besides, the conditions can be inherited from one or both the parents or occur from prematurity, labour and delivery complications, genetic disorders, toxin exposure, and maternal health.

Cysts or cystic hygromas usually occur on a baby’s head or neck as abnormal growths that can grow larger over time. It is seen that a baby develops cystic hygromas while it is still in the womb. But it can also appear after their birth.

The treatment for cystic hygromas does not begin while the baby is in the womb. Instead, the doctor will monitor the health of the baby to decide the required course of treatment. If they occur early in pregnancy, they might go away before birth. But if they are still present, neonatal surgery or new-born surgery is the first step of treatment. The cyst is entirely removed by surgical procedures so that it doesn’t recur. The cysts are not malignant, so the doctor may not consider surgery if it’s not causing any damage to the healthy tissues.

If cystic hygromas have grown large, techniques like sclerotherapy, chemotherapy, radiation therapy, and steroid medication may be used. These treatments shrink the size of the cyst so that they can be removed easily.

A hernia is a condition that occurs when a part of the bowel or intestine pushes through a weak wall of muscle holding the intestine in place inside the belly. A hernia can occur in any baby, but it is more likely to be seen in:

A hernia isn’t dangerous unless it is stuck in a weak spot or gets strangled. This could cut off blood flow to the strangulated part of the bowel and the section of the bowel can burst or die. In boys, low blood flow to the testicle can lead to partial or complete damage to the organ. Surgery is necessary as soon as a hernia is detected to prevent the possibility of strangulation.

Foetal lung lesions or lunge masses develop in the lungs before the birth of the baby. The two most common types of lung lesions are Congenital Pulmonary Adenomatoid Malformation (CPAM) and Bronchopulmonary Sequestration (BPS).

In CPAM, there is an abnormal development in a part of the lung which turns into a mass of lung tissue. As this tissue isn’t connected to the airway, the fluid within the mass can’t get out. In BPS, there’s an abnormally functioning extra piece of lung tissue with a separate blood supply that causes several problems. Other types of lung masses include Pulmonary Blastoma and Congenital Lobar Emphysema.

Although most of the lung masses or lesions are non-cancerous, these problems can turn severe. So, they need to be treated before or immediately at birth. However, lung lesions are usually managed months after birth in an elective setting. If neonatal surgery is performed, your baby has to stay in the NICU (Neonatal Intensive Care Unit). Once they are discharged after the removal of the lung lesion, they can grow into healthy children and adults.

What We Do at Narayana Health

At Narayana Health, we ensure that our patients get appropriate access to our advanced and multidisciplinary care after undergoing any neonatal surgery. Our team has expertise in foetal, maternal, and paediatric specialities as well so that you receive the best comprehensive treatment plan to help you and your baby get the best start in life.

Can newborns have surgery?

What is the most common pediatric surgery?

A Pediatrician can solve almost all kind of health problems of newborns, but a Neonatologist is specifically trained to handle complex and high-risk situations in newborns. A Neonatologist performs surgery with a team of Pediatric Doctors, Surgeons and Nurses.

What Types of Treatments Do Neonatologists Provide?

Can babies die from anaesthesia?

Anaesthesia is not fatal. Nowadays, Anesthesia is very safe. In very rare and delicate cases, it causes complications in children, like breathing problems, allergy or reaction to a medicine, strange heart rhythms etc. The doctor will evaluate the current health condition of the baby and then recommend if anaesthesia is safe for the child given the circumstances after weighing the risks.