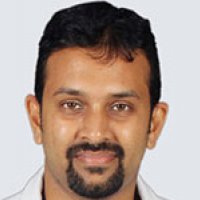 Narayana Health Groups has some of the best neurosurgeons in Mysore for decades, and Dr. Goutham Cugati is one of them due to his acumen in the diagnosis and management of neurological ailments. He has become the top neurosurgeon in Mysore, for his highly precise and meticulous work in his field. After completing the study in neurosurgery Dr. Goutham Cugati joined Narayana Health in 2013 as a Consultant Neurosurgeon. Prior to that, he was a Consultant Neurosurgeon at Dr. A. Lakshmipathi Neuro Surgical Centre, Voluntary Health Services, Chennai. He also worked as an Assistant Professor in the Department of Neurosurgery, JSS Medical College and Hospital, Mysore.

He has successfully completed thousands of neurological surgeries under the management of Narayana Multi Speciality. He is a lifetime member of professional and academic societies, such as Dr.Goutham Cugati of the Neurological Society of India. GA-95 and Karnataka Neurosciences Association. He is one of the top neurosurgeons in Mysore with his ability to provide top-notch services to patients across the state.

Dr. Goutham Cugati is well-known for his expertise in the field and is known as one of the neuro specialists in Mysore. He always ensures the best treatment possible and is efficient in dealing with acute neurological emergencies. He always stands out of the crowd to support the patient’s families dealing with neurological diseases. His treatment for a set of neurological conditions depends upon the body-nature, disease exacerbation, and health history of the patient.

Dr. Goutham Cugati  now is a Consultant  Neurosurgeon at Narayana Multispeciality Hospital, Mysore. He joined Narayana Health in 2013.
Previously he was a Senior Resident in Neurosurgery and later on was a Consultant Neurosurgeon at Dr. A. Lakshmipathi Neuro Surgical Centre, Voluntary Health Services, and Chennai. He also worked as an Assistant Professor in Department of Neurosurgery, JSS Medical College and Hospital, Mysore.
Dr.Goutham Cugati is life time member of the Neurological Society of India. GA-95 and Karnataka Neurosciences Association.