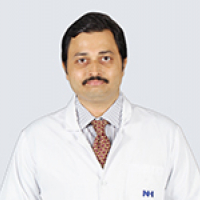 Prior to joining NH, he was working as a consultant in Columbia Asia Hospital in Mysore.

Dr Satheesh Rao has performed more than 2000 diagnostic and therapeutic Upper GI Scopies and Colonoscopies, performed 2000 diagnostic and therapeutic ERCPs and Capsule Endoscopy and Assisted Double Balloon Enteroscopy. Some of the languages he skilfully speaks are English, Kannada, Hindi, Tulu, Marathi, Malayalam. He believes in speaking the language patients speak over so that they feel utterly comfortable while on the other side of the table. If you are facing any stomach or liver-related disorders lately, make an appointment with him to get the best consultation advice for your child or yourself.

He is one of the top gastroenterologists in Mysore who has successfully managed to hold a few of the Journals under his name. He had lot of publications in various national and international journal.. In addition to this, he has become an important part of the Karnataka Medical Council.

Member of the Karnataka Medical Council