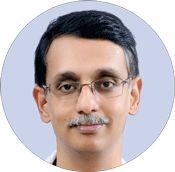 Dr. J Kannan is a senior consultant interventional cardiologist and Electrophysiologist at Narayana Institute of Cardiac Sciences, Narayana Health City in Bangalore. He also worked as Assistant Professor of Medicine in the Department of Cardiology at Sri Ramachandra Medical College and Research Institute, Chennai.

Dr. Kannan has extensive experience in cardiology and over the years, has practised and trained extensively across the country.