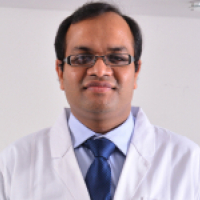 He is the first GI Surgeon in East Delhi & adjoining NCR to start full-fledged GI Surgical Services at Pushpanjali Crosslay Hospital (Now Max Hospital). He is the only surgeon in East Delhi and NCR and amongst few in Country to perform complex surgery of Cytoreduction with HIPEC (Hyperthermic Introperitoneal Chemotherapy) for Disseminated peritoneal Cancers. He is performing full array of Advanced Minimal Access GI and HPB Surgery. He is a fellow of Minimal Access HPB Surgery from Seoul National University Bundang Hospital, South Korea. He is a certified Robotic Surgeon trained at International School of Robotic Surgery, Italy. He is trained in Taiwan for the advanced laparoscopic Colorectal Surgeries. He has been to Weight Loss Centre at the University of Cincinnati, Ohio USA for Bariatric Surgery (Weight Loss Surgery). He has many publications in national and international journals.

1. MCh (Surgical Gastroenterology)- From GB Pant Hospital, University of Delhi in the year 2013

7. MBBS-From University College of Medical Sciences, University of Delhi in The Year 2001

2. Presented Poster on “Neuroendocrine Tumors of the ampulla” at Annual Conference of IASG 2012, BaA video, India

5. Stood Second In the Surgery Quiz at the Annual Conference of Delhi State Chapter of ASI, 2005(as a team event).

6. Presented following papers at the Annual Meeting of Oncology Group of Delhi(OGD),2005:

7. Gastrointestinal Stromal Tumors and Imatinib and its effect on Blood Sugar control.