What is Swine Flu?

written by Narayana Health March 30, 2015
Swine Flu is a respiratory disease caused by viruses that infect the respiratory tract of pigs. In a number of instances, people have developed the Swine Flu infection when they are closely associated with pigs (for example, farmers, and pork processors).
What causes Swine Flu?
Swine Flu is contagious, and it spreads in the same way as the seasonal flu. When people who have it cough or sneeze, they spray tiny drops of the virus into the air. If you come in contact with these drops or touch a surface (such as a doorknob or sink) that an infected person has recently touched, you can catch Swine Flu.
Despite the name, you can’t catch swine flu from eating bacon, ham, or any other pork product.
The cause of the 2009 swine flu was an influenza A virus type designated as H1N1. There have been small outbreaks of swine flu since the 2009 pandemic. In 2011, a new swine flu virus was detected while another one was recently discovered in India – all mutated strains of H1N1.
India has recorded over 31,156 positive test cases and 1,841 deaths till March 2015. 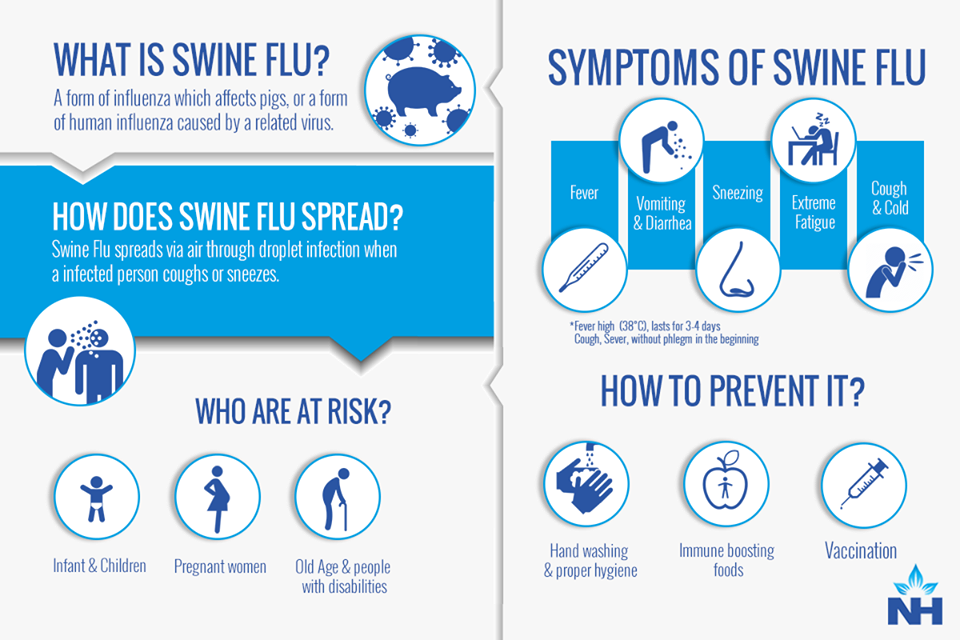 What are the symptoms of Swine Flu?
People who have Swine Flu can be contagious one day before they have any symptoms, and as many as 7 days after they get sick. Kids can be contagious for as long as 10 days.
Most symptoms are the same as seasonal flu. They can include:
Like seasonal flu, Swine Flu can lead to more serious complications, including pneumonia and respiratory failure. And it can make conditions like diabetes or asthma worse. If you have symptoms like shortness of breath, severe vomiting, abdominal pain, dizziness, or confusion, call your doctor right away. 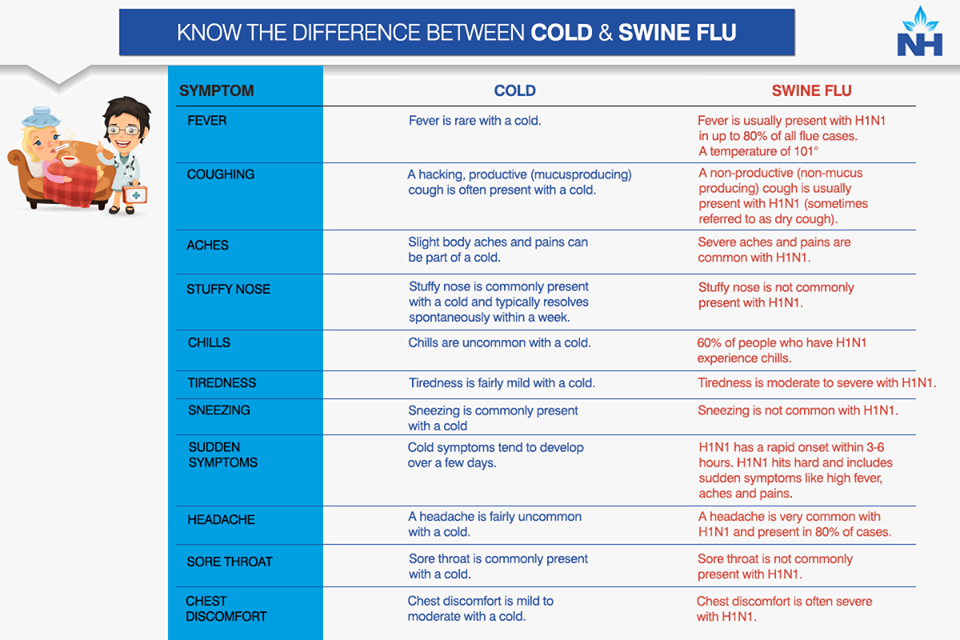 Who are more likely to be at risk of Swine Flu?
How is Swine Flu treated?
Some of the same antiviral drugs that are used to treat seasonal flu also work against H1N1 Swine Flu. Oseltamivir (Tamiflu) and zanamivir (Relenza) seem to work best, although some kinds of Swine Flu are resistant to Tamiflu.
These drugs can help you get over Swine Flu faster. They can also help keep it from being too severe. They work best when taken within 48 hours of the first flu symptoms, but they can help when taken later.
Antibiotics won’t help, because flu is caused by a virus, not bacteria.
Over-the-counter pain remedies and cold and flu medications can help relieve aches, pains, and fever. Don’t give aspirin to children under age 18 to avoid the risk of Reye’s syndrome. Check to make sure that over-the-counter cold medications do not have aspirin before giving them to children.
Vaccine for Swine Flu
The same flu vaccine that protects against seasonal flu also protects against the H1N1 Swine Flu strain. You can get it as a shot or as a nasal spray. Either way, it “teaches” your immune system to attack the real virus.
Besides a flu shot, there are other things you can do to stay healthy:

Remember, know your symptoms and act accordingly. Full knowledge is the job half done!

How much do you know about your food?

Ebola Virus: All you need to know

All About Body Mass Index (BMI)

Why Ergonomics during Work from Home is important?