Neuro intervention, could you enlighten people about this nascent medical speciality?

This speciality is known for various nomenclatures – intervention neurology , endovascular neuro-surgery or neuro-intervention surgery or intervention neuroradiology. Close to a decade back, as neuroscience, this was not a major part of medical discipline, and it was never included as a separate entity when setting up a neuroscience department. During my residency in AIIMS from 2006 to 2009, neuro-intervention was still in its infancy stage. There were not many takers for the course, as aspiring doctors were apprehensive about its future prospects. It was in 2002, after the results of the first positive trial (ISAT) that the speciality got its name and the medical fraternity started acknowledging it. In the next coming decade combined with revolutionary technological development and increasing awareness had made this speciality an important aspect of the quaternary level of medical care.

Neurointervention has become a game-changer in dealing with certain hemorrhagic strokes and since 2015 onwards for the ischemic stroke. At Narayana Hospitals, we have established an extremely successful department with the state of the art technology dealing with both the aspects of the stroke and besides them many other vascular diseases of head, neck and spine.

How has radiology helped you in neuro-intervention?

By my training background, I am a radiologist who has completely forayed into neuro-interventions. In its initial days, this field was primarily practised by the radiologists. Now-a-days, more and more people are coming from the neurology and neuro-surgery background, reaffirming the popularity of these minimally invasive procedures.

As radiologists, we are trained from our formative days to analyze images because all decisions are being made on the radiological projection of images.

How does one identify a stroke?

Although the human body is a perfect machine, a stroke can be debilitating if not identified and treated promptly. One can spot a stroke FAST when the face is drooping, arms show weakness, there is difficulty in speech , numbness or weakness of the leg, confusion or trouble understanding, trouble seeing in one or both eyes, trouble walking, dizziness, loss of balance or coordination, and thunderclap or severe headache with no known cause. All of these symptoms happen suddenly. This is the moment when you should immediately reach for a medical helpline. This training aspect of ours, I believe gives us an edge for executing them.

How many kinds of Strokes are there?

As a neuro-interventionist, we are primarily dealing with a stroke which is, Haemorrhagic or Ischemic.

Haemorrhagic strokes are due to the rupture of brain blood vessels. Bleeding from the ballooned weak spot which develops in an individual because of high blood pressure, turbulent blood flow or inherent weakness of the blood vessel wall. These are called Aneurysms . The bleeding can also happen because of abnormal vascular malformation in the brain which may be acquired or may be present since birth, these are known as arteriovenous malformations. These lesions have the potential to bleed or rebleed when already the haemorrhage has happened. These bleeding episodes are potential life-threatening and rebleed are almost always catastrophic.

An ischemic stroke occurs when the blood flow gets blocked due to clotting, which could be small or large. This is commonly known as a paralytic attack or brain stroke. In these instances the patient loses the functionality, like the function of arm, legs, speech, vision, comprehension, balance, depending upon whichever part of the brain gets its blood supply cut off.

As a neutro-interventionist, our job is to seal the leakage in the hemorrhagic stroke and open the occluded blood vessel in the ischemic stroke. 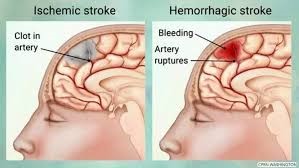 How is a patient who has suffered a stroke treated?

In haemorrhagic strokes, earlier the patients were being treated by open surgeries, where the bleeding vessels would be surgically “clipped” or Resected or coagulated after getting open access by performing major brain surgeries. Now we also have a minimally invasive way of treating those bleeding sites by our neuro-interventional procedures.

A catheter is inserted through the groin region from the femoral artery till the brain arteries or veins under Xray guidance in the specially designed neuro-cath lab or neuro-angio suite. The bleeding point is occluded by “coiling” the weak spots: filling in with platinum meshes or “embolizing” with embolic agents. 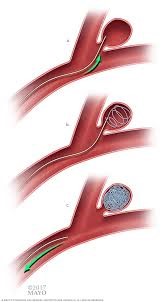 In Ischemic stroke that occurs due to vessel occlusion, our job as a neuro-interventionist is to open the occluded blood vessel by taking the clot out by various means, “Mechanical Thrombectomy” so that the blood supply to the part of the affected brain is restored and the functionality of the individual is recovered completely. Earlier the only way to open the occluded blood vessel was by injecting clot-busting medications which have got limited efficacy as proven by various studies.

What is technology assisting to treat strokes and their success rate?

With the evolution in technology, the neuro-interventional procedures have become much more amenable and more safer. Hi-tech hardware technology and imaging technological development have completely revolutionized the entire scene. Most of our hardware is imported from the western hemisphere. In the near future with the availability of “Make in India” products, the procedural cost would see a significant reduction, making them more amenable in the society.

How prone are Indians to stroke?

As Asians, because of our gender pool, Indians have got a very high risk of cardiovascular disease, therefore are more vulnerable to develop plaques and clots. This aggravates the incidence of stroke making it very prevalent. People fail to identify a stroke due to lack of awareness which comes as the biggest setback and challenge in reducing mortality and morbidity in stroke patients. It is necessary to spread awareness and then the information about the availability of a stroke ready comprehensive hospital makes a huge difference. Stroke has an astounding burden on society and if it impacts the age of 40-50 years, the productive years of an individual leads to a huge economic implications.

What have studies indicated about stroke and the efficacy of neurosurgery?

In 2013, a paper was published mentioning that what you are doing is no good, soon after two more papers came in international medical journals with similar comments. It was incredulous because doctors were a witness to the improvement in the patient’s outcome, but these papers said otherwise. Two years later in 2015, a series of six papers came back-to-back that the earlier three papers were having certain flaws, and lauded our efforts stating that the treatment has a positive effect. This compelled the American Stroke Association to acknowledge it and change the guidelines in 2015 by adding an addendum out of the way because in 2018 the update was going to come in the complete guidelines. It said that in large vessel occlusion this is criteria that has to be followed. The studies have a class one level of evidence i.e., A, the highest level of evidence for any therapy. It was indeed a landmark achievement after which a paradigm shift happened because no therapy had that kind of literature evidence or the documents proof. The guidelines stated that anyone who suffers a stroke within 4 1/2 hours the patient is still amenable for an IV Thrombolysis i.e., IV drug, but if you got a large vessel occlusion the patient has to be rushed to the cath lab. India has an adequate number of trained doctors, but their number is inadequate to handle an increasing number of stroke incidence.

How is the Interventional Neurology Programme at Narayana Hospitals, Gurugram and Delhi?

I am proud to say that Narayana Hospitals is having a stroke ready facility equipped with the state of the art technology as good as anywhere in the world. As we are a very niche speciality and one of the high volume centres in the country dealing with all sorts of complex diseases.

Our endeavour is to reach out to the masses with world-class treatment with the state of the art technology and affordability.

What are the awareness programmes conducted for the general public?

Our first and most messengers are the paramedics and the nursing staff, therefore, the first ventures are to educate such people in small nursing homes. Even the practicing doctors are made aware of these therapies and the recent developments and guidelines through our continued medical education programme. We are constantly conducting public awareness programmes for educating people about stroke. The impact, however, is more profound when stroke survivors and their families share their experience in front of the potential population. The social media awareness campaigns are one of our pivots.

As teaching proctor, I am travelling across the length and breadth of the country and even in the neighbouring countries as “Proctor” for establishing programmes, guiding and proctoring cases for many new aspiring doctors, to help this speciality grow beyond the metros.

Why Treating Stroke is an Emergency?

Busting the myth about stroke: 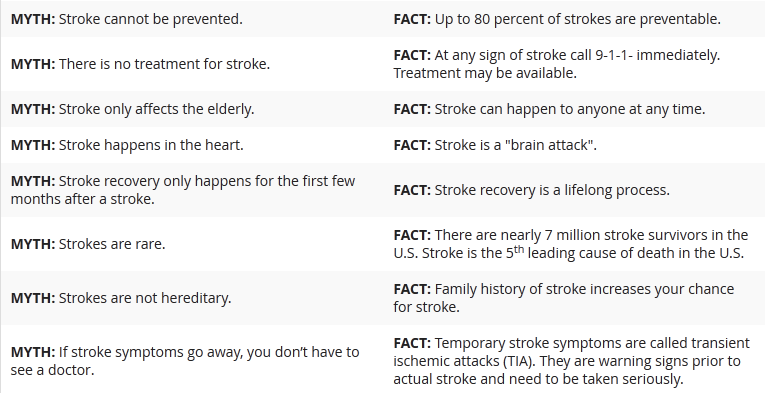 Lifestyle changes one should adopt during the 20s, 30s & 40s

What is Beauty Parlour Stroke Syndrome

What to do when someone is having a...

A few words of Epilepsy

Migraine and Hormones in Women