Strike Away Your Worries and Live a Stroke-free Life

Did you know that close to 800,000 people around the world, experience a stroke each year?

Quite alarming, isn’t it? Knowing how wide-spread this disease can be, it’s imperative for us to learn about its causes, signs and symptoms to help you; your loved ones and others around avoid being a victim.

Contents hide
1 So, what is a stroke?
2 But what really causes a stroke?
3 How can you tell if you are experiencing a stroke?

So, what is a stroke?

A Stroke, also known as cerebrovascular accident (CVA) or brain attack, occurs when there is no proper blood supply to the brain, resulting in improper brain function and cell death. It’s is a result of a buildup of many health factors, occurring all at the same time. Some of the common medical reasons that cause one to have a stroke include high BP, diabetes, cardiovascular diseases, high cholesterol, etc.

But what really causes a stroke?

Although it’s found to occur more predominantly among adults over the 50-55 year mark, there is a high degree of predictability for persons coming from a family history of strokes. But this disease can occur to anyone at the spur of the moment leaving you little or no time to recover. Here’s a look at the three most common and dangerous forms of stroke.

Ischemic: This is caused when the arteries connected to the brain are blocked or become narrow due to blood clots, resulting in severely reduced blood flow.

Hemorrhagic: Hemorrhagic strokes are caused due to hypertension, trauma, blood-thinning medications or aneurysms (weakness in blood vessel walls) that rupture and burst open arteries, making them bleed. The hemorrhaged blood puts pressure on brain cells and damages them.

Ischemic Attack (TIA): Occurs when there is a temporary drop in the blood supply to the brain, depriving it of essential oxygen. TIAs are similar to ischemic strokes. They serve as warning signs for future strokes and indicate that there is a partially blocked artery or clot source in the heart. 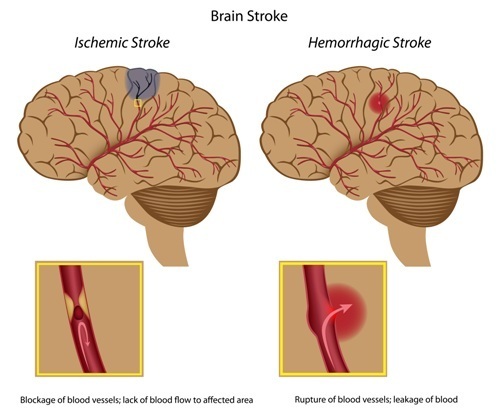 How can you tell if you are experiencing a stroke?

There are signs and symptoms!If you happen to face any sudden numbness or weakness of the face, arm or leg, especially on one side of the body, then it’s a pretty clear sign that you’re experiencing a stroke. Few other signs include sudden confusion, trouble while speaking, blurred vision, loss of balance while walking or no coordination between limbs, coupled with migraines and severe vomiting.What is the prescribed treatment?Prompt medical treatment is necessary if you or anyone you know have faced these symptoms.

Get a General Practitioner to check you and begin treatment at the earliest. These days, with medical advancements, acute stroke therapies try to stop a stroke by quickly dissolving the blood clot or by arresting the bleeding. Rapid CT scans and other diagnostic measures are used to determine proper treatment, which may include both medication and surgery. Also, drug therapy with blood thinners is the most common and effective treatment for stroke.

The experience of a stroke differs from person to person. Practicing some simple habits like eating healthy, exercising regularly and retaining positive thoughts can help reduce stress, anxiety and health issues, thereby reducing the chances of a stroke. There is life after stroke and Narayana Health can help you adapt and find ways to overcome any hurdles you may face.

Rakesh Sharma (name changed) of 45 years, had a severe headache followed by a course of vomiting. He became unconscious and his relatives rushed him to Narayana Multispecialty Hospital, Jaipur at midnight. The doctors in emergency department immediately referred him to the neurosurgeon. A CT scan revealed that Rakesh had a stroke. Rakesh underwent the surgery that involved opening his skull and removing the clot. He recovered well after the surgery and is back to lead his normal life.

Blood on your toilet paper? Know what’s causing it.

Everything You Need To Know About Hypoglycemia

When to know Headache is serious?

All you need to know about Autism

What Alzheimer’s Disease teaches us