written by Narayana Health February 23, 2015
Millions across the world have benefited by advancement in medicine and healthcare technology. Billions of dollars is spent on medical research and development to discover breakthrough technology that aims at improving the quality of people’s life.
What is Coronary Angiography?
Coronary angiography is an imaging technique which allows us to picture the coronary arteries supplying the heart and diagnose the extent of blockages in them. Angiography is used to determine which treatment option would be best for the patient.

Traditionally, coronary angiography is done by putting a plastic tube in the femoral artery i.e. The artery supplying the leg. Through this plastic tube called a sheath, small caliber plastic pipes are taken to the heart and dye injected into them to take pictures in cath lab.

·           Higher chances of bleeding complications and blood collection at local site which can be troublesome for the patient and rarely requiring blood transfusions also.

To circumvent these problems, a recent development called Radial Angioplasty has comewhich is safe and convenient for the patient. Radial artery I.e. Artery which supplies the hand is one of them and one of the most frequently used route now a days for coronary angiography. The same procedure is followed in this as in femoral route but the chances of complications and bleeding are minimal.

Advantages of Radial Angioplasty
·       It allows patient to be mobile just after angiogram and allows him to go home as early as 2 hours after procedure.
·       The advent of radial angiogram has converted this into a day care procedure and saved into hospital expenditure of the patient and stay duration. 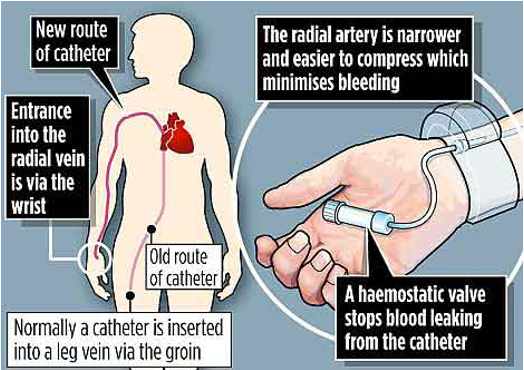 Radial route has been used for diagnostic angiography as well as therapeutic purpose i.e. Coronary angioplasty or PTCA i.e. Percutaneous Transluminal Coronary Angioplasty.  Through the same procedure as angiography, a wire is taken down to the coronary artery with blockage and put across the blockage. Then a balloon is inflated across the blockage to make appropriate place for stent. Following this a stent is deployed across the blockage which scaffolds the artery and prevents further recurrence of blockage in future.
What is a stent?

Stent is a metallic mesh which has enough strength to open up the coronary arteries. Previously the angioplasties were performed without placement of a stent, but this was associated with high rates of reblockages. This procedure is now called as POBA i.e. Plain Old Balloon Angioplasty. With the advent of stent, this procedure has almost become obsolete now and most of the angioplasties now are being performed with stents and called PTCA +stent.

Again the advantage of choosing radial route over femoral is shorter duration of hospital stay with most of the patients being discharged the next day and early mobility as soon as 3-4 hours after angioplasty. The bleeding complications are minimal. Still the femoral route is used sometimes where radial route cannot be used and for performing complex angioplasties.

A New Way To Reach Your Heart

Stroke – How to avoid one?

Everything about Heart Bypass Surgery

Why you should not delay your impending heart...

HOSPITAL STAY OF PATIENT FOR HEART SURGERY: A...

Repairing the heart while it is still beating!