Doctors suspect ‘twinning process’ might have gone wrong during development in the womb.

Parents of the baby born with two pairs of lower limbs and two sets of genitals breathe a sigh of relief after a successful corrective surgery at Narayana Health City in Bengaluru. The boy baby born to a couple from Puladinni Village was delivered at a primary health centre in Raichur. Sighting the abnormality, the infant was shifted to a private hospital in Bellari, which was covered in sections of the media. The parents were reluctant to opt for a surgical correction of their baby’s deformity as they could not afford the cost of treatment coming from a poor economic background. The department of Pediatric Surgery at Narayana Health City in Bengaluru took the initiative to treat the baby and perform this surgery free of cost. The undeveloped parasitic twin was separated from the baby in an uneventful surgery that lasted for a little more than three hours. 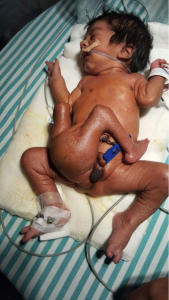 The baby was admitted on 24th January at Narayana Health City. Since the infant had travelled a long distance of more than 300 km, it was dehydrated and required oxygen support. the child required resuscitation. The team of doctors-pediatric surgeons and neonatologists,  proceeded to resuscitate the baby by correcting the baby’s dehydration, sugar levels, temperature etc. and stabilized the baby. Once the baby was stable a team of doctors led by Dr. Ashley D’Cruz, Director & Sr. Consultant Pediatric Surgeon & Urologist as well as Dr. Sanjay Rao, Sr. Consultant Pediatric Surgeon at Narayana Health City observed the baby for a couple of days to ensure everything was alright before going for further investigations.

As part of the investigations, the baby had an ultrasound to make sure kidneys were in good condition, x-rays were taken to examine the spine and lungs, an ECG and ECHO to check the heart and once it was confirmed that everything was in order, the team proceeded for a CT scan. A contrast CT angiogram was performed where a dye was injected into the baby’s veins as it was important to identify where the blood supply was coming to the parasitic twin. “Since the parasitic twin does not have its own heart and circulation, it was getting blood supply from the baby. Therefore, it was important for us to know where the blood-supply and blood vessels are connected so that we could safely separate the two”, informed Dr. Sanjay Rao.

After the CT scan was done, reconstruction was created to further define the vascular system, blood supply, bones, tissues and so on. This was essential to allow doctors to plan for the surgery. During surgery it was important to know what is shared between the baby and the parasite. That’s the reason all the tests were done initially to ascertain the blood vessels and blood supply; sometimes even some organs are shared in such cases. “The baby(also called autosite) on its own was fine and didn’t have any major anomalies or complications. Therefore, it was very critical to define everything and plan the surgery meticulously. Our main precaution was to protect the interest of the baby (autosite). Care was taken to ensure there was no injury to the baby’s parts rather than the parasite’s part” said Dr. Sanjay Rao. The surgery team comprised of the pediatric surgeons, anesthetists,surgical nurses and theatre technicians.

After the operation the baby was managed by the surgical and neonatology teams. Other doctors, such as the cardiologist and radiologist were involved as and when required 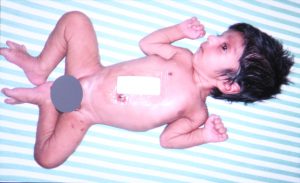 The doctors at Narayana Health City attribute this condition to two theories – one hypothesis is based on the twinning process when twin babies are developed in the uterus. In this case, the second baby (the parasite) that was not properly formed. It did not develop it’s own heart and circulation and hence remained attached to the host baby (called autosite). The other hypothesis is based on formation of specific types of tumours (called foetus in foetu). In this situation tumor itself matures to such an extent that it starts to form body parts such as spine, some bones or various other organs. Therefore, it is either a faulty twinning process or a form of new growth. However, this baby doctors feel, is more likely to be a faulty twinning process.

“Looking at the baby now, we don’t see any major issue as the baby is doing fine and has started feeding on mother’s milk”, informed Dr. Ashley D’Cruz. “There could be some minor issues as the child grows up; we have to monitor the child to ensure things are going the right way. At present there is nothing to suggest that the child will have problems or may not have normal development; everything is normal now”, he confirmed. The child will be under medical supervision in order to make sure that the child is growing fine and no other medical issues come up.

Doctors treating the baby at Narayana Health City confirmed that the baby has recovered well and is off all medicines and antibiotics. All necessary vaccinations have also been given and the baby is bonding well with the mother now. For some time the family may have to travel to Narayana Health City for follow-up consultations and thereafter they can opt for telemedicine consultation facility from Narayana Sanjeevini Hospital in Bellari, while doctors from the hospital in Bengaluru will liaison with the pediatric team in Bellari for follow-up whenever required.

About the baby’s parents:

Chennabasava, aged 26 (father of the baby) works in an agricultural farm in his village, which is around 60 kms from Raichur in Karnataka. This is their second child; the first child is also a boy and he is 2 year old. Chennabasava’s wife is a home maker and helps him in the field.

Every Head has its own Headache

Stroke – Is it predictable and preventable?

You Don’t Have to Compromise on Breastfeeding

Which Cooking Oil is the Best for Indian...

How to maintain a Balanced Diet

Travelling in Pregnancy – Do’s and Don’t