What is Bell’s Palsy?

Bell’s palsy is also known as acute peripheral facial palsy of unknown cause and is a condition that can occur at any age. It is characterized by the sudden weakness of facial muscles on one side which causes one half of your face to droop. Your eye on that side resists closing and your smile appears one-sided. The exact cause is still unknown, though a few theories exist. Bell’s palsy was named after the anatomist Charles Bell who first described the condition.

Bell’s palsy is believed to be the result of inflammation and swelling of the facial nerve that supplies the muscles on one side of your face. Viral infections that are associated with Bell’s palsy include:

As a result of the inflammation of the facial nerve, there is compression of the nerve when it passes through a narrow tunnel in the facial bones, leading to a loss of function of the muscles on one side of the face as well as the lack of production of saliva on the affected side.

The symptoms of facial palsy that may appear all of a sudden are:

Rarely, Bell’s palsy may affect the nerves on both sides of the face.

Those who are at an increased risk of getting Bell’s palsy include pregnant women, diabetics, and those with an upper respiratory tract infection.

Bell’s palsy is usually mild. However, there can be complications in some severe cases such as:

What is the difference between facial palsy and Bell’s palsy?

Facial palsy refers to the paralysis of the facial nerve or simply facial paralysis. It can be due to a number of causes, some of which include tumours, stroke, The causes of facial palsy are divided into two categories:

Bell’s palsy is a type of  LMN facial palsy that is idiopathic, meaning its cause is unknown and is a diagnosis of exclusion.

How is Bell’s Palsy Diagnosed? 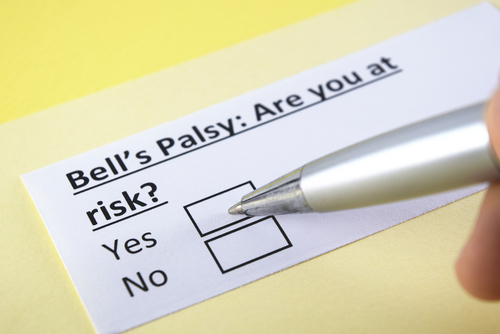 A treating physician diagnoses Bell’s palsy after an examination of the face and obtaining a detailed history about the onset and whether there was a precedence of a viral infection.

You will be asked to move your facial muscles by doing activities such as lifting your eyebrows, smiling, frowning, and showing your teeth.

It is important to rule out other causes such as a stroke, Lyme’s disease, or a tumour. Other tests that help in confirmation of the diagnosis are:

Physician may recommend medicines or physiotherapy to speed up the recovery process.

How Is Lung Cancer Diagnosed and Treated?

Stroke – Can stroke occur in children?

Amyotrophic lateral sclerosis: All you need to know

Brain Angiogram: Why Is It Done?

All you need to know about Ataxia