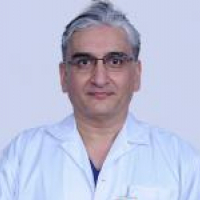 Dr Hasit Rudresh Kumar Mehta completed his MBBS and MS in 1986 and 1989, respectively, from the MP Shah Medical College & Irwin Group of Hospitals from Sourashtra. He went on to complete his DNB in Genitourinary Surgery from the PD Hinduja National Hospital and Medical Research Centre, Bombay in 1994. In 1996 he completed his MNAMS in Genitourinary Surgery from the National Academy of Medical Sciences, New Delhi. His career began in the year of 1987 and his engagements has spanned leading hospitals such as Institute of Kidney diseases in Ahmedabad, PD Hinduja National Hospital and Medical Research Centre in Bombay, Breach Candy Hospital in Bombay and St John’s Medical College Hospital in Bangalore. He is currently working as Senior Consultant in Urology department at Narayana Health.

Has over 6 journals published in national and international journals. He has also attended over 14 conferences.